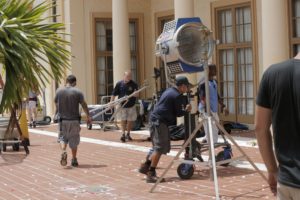 Maybe you’re reading this article because you want to become a grip or gaffer in Miami.

Well, then I’m going to break it down for you without a bunch of BS.  I’ve been a gaffer in Miami since the ’90s, and I’ve learned a thing or two. I’m not trying to sound like your father, but consider going to college to get a “real job.” Don’t get me wrong, my career as a gaffer in Miami has never had a dull moment, and is extremely rewarding. But I firmly believe that you must earn a degree before becoming a capital “R” real grip or gaffer in Miami.

Could a 4-year college education “make or break” your grip or gaffer career?

Hear me out on this. Some of the best gaffers and Key grips I know are highly educated. Their education shows in many ways.  They’re able to manage time, lead teams, problem solve and think strategically. Plus they can communicate on the set with highly intelligent producers and directors.

Now, this doesn’t mean that you have to attend a traditional 4-year college.  A degree at an accredited community college, art or film school will most likely support you in your efforts to achieve all of the above. Or, even a degree in a seemingly unrelated field like Business could help your efforts to become a grip or gaffer in Miami.  Your advanced education – at least an Associate’s — will show up and show off.

What’s the downside to becoming a Grip or Gaffer in Miami?

Here’s some of the harsh reality: there’s a lot of uncertainty as a freelance grip or gaffer in the film business. Some years you work a lot. Other years you don’t. One year you may work on back-to-back feature films as a gaffer, and you’re rolling in the money. Then, the next year you’re a gaffer on commercials and barely work 60 days the entire year, plus you can never make dinner plans on the days you’re on a film set.  My buddy Jim Pescrille, a highly successful gaffer in Miami agrees: “Pursuing a career as a gaffer/ electrician in the film business is not for the faint of heart. There are ups and downs; too much work and exhaustion or no work and worry. Over the years I’ve learned to save as much money as possible because you never know if the lean days are coming.”

In my experience, you never know what time you’re going to get home from your freelance commercial, feature film, TV series or corporate industrial. Production may have booked you on set for a 10-hour day, and then all of a sudden you’re there for 24 hours or more. You cannot say, “Hey, I have to jump. I have dinner plans tonight.” Nope, they own you. Consequently, you may have a very rough time planning your life.

The blurry life of a grip or gaffer in Miami

Living on sets as a grip or gaffer freelancer can be wildly frustrating. You’re afraid to take a vacation because you’re paranoid that a call will come in for that next big job that’ll get your bills paid. I have seen many a marriage suffer or end up in divorce because of the strains a film and television business job put on the relationship.

There’s an old joke an Art Director friend used to tell: Q. “What’s the difference between a film and TV crew member, and a circus carney?” A. “The quality of their teeth!” Film and television crew can be transient, traveling across the US [and world] to work a film job, just like circus workers. Plus, you can imagine, working as a grip and gaffer is extremely hard on your body. IMHO you need a degree so that you have a backup plan/career for when you grow older or become work disabled. Teaching is a fantastic retirement exit strategy for a grip or gaffer. But you must have a bachelor’s degree to ensure that this will happen. Or, someday you may want to start a grip and lighting business. Again, a degree in business would be invaluable. Owning your own business may be the only way you make over $160,000 a year as a grip or gaffer in Miami.

Career paths for a grip or gaffer

That said, there are several career paths you can follow to obtain the position of Key grip or gaffer in Miami on a film set. The track with the most merit is starting in the production department working a minimum of 4 years as a film and television PA (production assistant).

Production assistant to grip or gaffer

Stay with me here. Working in a production office as a PA is a crucial experience that will serve you well once you start working in the grip and lighting department.

First, you will know how to relate to producers. Second, you will be fluent in production language. Production has its unique terms with its names and phrases. This language takes at least two years to learn — if you’re paying attention! Pescrille also offers a great tip, “I’ve always thought the best path for Grip & Electric is through a lighting rental shop. There, you learn nomenclature, and you can get your hands on the gear.” Funny thing is I can always pick out a crew who didn’t start as a PA. They don’t know where to get answers to issues or questions that arise and have no idea if a situation or circumstance is urgent or not. Finally, learning the paperwork that keeps productions running on time and budget is extremely important. If you put your time into working as a PA, you’ll earn the respect of your peers for a lifetime.

But if you want to become a production savant then work as a PA for a minimum of 4 years. You’ll be genuinely versed in the art of production, and you’ll know your way around a film set like the back of your hand.

Camera department to grip or gaffer

After your basic film instruction as a PA, work for at least a year or two in the camera department, and with the art department.  If you’ve trained in 2 or 3 departments, you’ll be practically indispensable, and you’ll always be able to find a job on a film set anywhere in the world. Trust me; you’ll burn out if you work in any one department for too long.

Switching from lighting to camera department is unusual but a perfectly natural experience. I’ll warn you though; haters will question if you can work both in lighting and grip and then in the camera department. But it is possible. Few do it, more should. Let me ask you this: what makes more sense than knowing how to light and work as a gaffer and then become a camera assistant and later on become a director of photography? Shane Hurlbut, ASC, did it.  So did Jon Engstrom, Director of Photography, owner of Scheimpflug. Pescrille agrees, “In my experience cinematographers have often come up through the camera department and I find them to be excellent at their jobs.”

My bottom line for becoming a gaffer or grip in Miami is this: patience is a virtue, and it’s most critical when climbing the ladder on film and video sets.