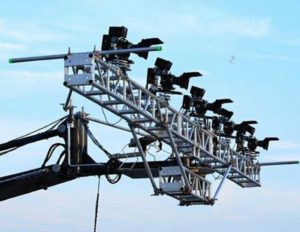 Any grip in Miami would salivate over the stunning grip rigs on this Grip’s Facebook page: car rigs, helicopter rigs, Polaris rigs and all in between.  These creations by grips are jaw-dropping and awe-inspiring. Some of these grip concoctions are seriously a work of art. Check it out!

Working as a Grip in Miami, we’ve often seen creative camera movements like these. But as productions get smaller, the grip craft is in decline. Grips like my buddy Charlie McGowan are becoming a rarity. Charlie is one of the top 3 grips in Miami. There used to be many more grips in Miami with way above average talent. Call me if you need a grip in Miami, I will introduce to one of my guys. 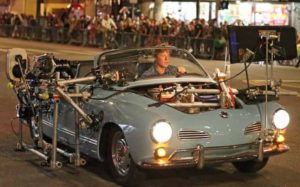 Let’s look at the history of the craft.  In the United States, grips are movie technicians in the art of filmmaking. Grips head their own department on a film set and are under the command of the Key Grip, the head of the department. Grips have two roles: 1) They work intimately with the camera team to provide camera support, particularly when the camera is fixed to a dolly, crane, or in an unusual position, for example on the hood of a car. Grips often specialize in operating dollies or cranes. 2) They work closely with the electricians to light scenes, shape light, diffuse light and work directly under the head of the grip and lighting department otherwise known as the Director of Photography.

Grip’s duties are to construct and keep working the apparatus that supports cameras. Support equipment, includes tripods, dollies, tracks, jibs, cranes, and stationary rigs built of highly engineered heavy duty parts that require a high level of experience to operate. Grips, particularly Key Grips must have the patience of a saint to always be at the Director and DP’s side.  Camera is often a high-stress environment. An excellent key grip must have the people skills to diffuse stressful situations with producers, actors and crew. They can never be afraid to “step up” and call a scene unsafe and then speak up to stop filming and make the set safe. Simple environmental occurrences like wind and rain can cause injury and sometimes death on film sets. Being a great diplomat separates the good from the great key grips.

Where does the Grip name come from? 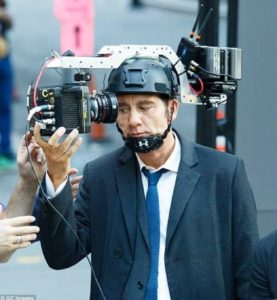 The name grip came from the circus. Vaudville is where it all began. As early as 1940 the name perhaps originated from film technicians gripping or carrying tool bags. Hand crank cameras that were bulky and heavy required big men to grip the camera tripod from below and keep it steady. “Keep a good grip on the camera and tripod,” was the mantra heard in the early days before proper camera rigging, heads and support were later developed.

As time marches on, cameras move more, requiring highly complex rigs that are extremely expensive, wholly customized and handmade. And they’re becoming more sophisticated as camera support technology comes of age. Work with drones and helicopters is now common and the key grip’s duties have rapidly expanded. Often this work is hazardous. Safety is a significant consideration for grips in Miami, and our guys here have a stellar record of no one getting hurt. Cameras hanging from cables off of helicopters are just one example. See Klaus Obermeyer (Klaus Cam). With that said, check out this link to a very simple rig with ropes as camera support.

The Art of Grip 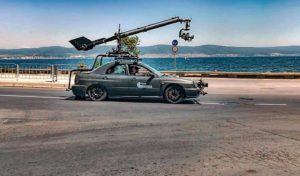 While the art of gripping becomes more sophisticated, 2×4’s and nails, sandbags, speed rail, c-clamps, and hammers are still used extensively to get scenes shot safely. A good grip in Miami can tie a wide range of knots, rig ratchet straps as wells as a tailor creates a three-piece suit, and can defy gravity with their knowledge of camera support.

In my humble estimation, it takes 4 to 8 years of apprenticeship to master the art of advanced gripping. With 3 years minimum to become a basic grip.  One critical attribute of a professional grip is that they take safety seriously and head off unsafe issues on a film set before bad things happen. Hopefully mentoring young grip talent will continue in the US.  Some people tell me that the art continues in Europe and that it takes much longer in some areas there to become the head of the department aka the “Key Grip.”

Grips in general belong under the labor Union IATSE [International Alliance of Theatrical Stage Employees]. But we have both IATSE and non-union guys on my Miami grip trucks.